One of the most positive things to come out of the pandemic for me is re-connecting with people; be they old school friends and teachers, or colleagues and contacts from way back.

I’ve particularly enjoyed chatting to some of the folks from my Walker Williams PR Agency days and recently it was was lovely to catch up with Colette Connors, who was the Senior Product Manager of British Bakeries brands including Hovis, Mothers Pride and Nimble at a time when I was their PR Account Manager at the agency.  Colette talked fondly on LinkedIn about the Christmas parties we used to put on for the marketing and sales teams!

Events have always and will always be one of my favourite activities and I’m delighted that through Rise I can carry on planning and executing first class events with my business partner, Sarah MacDonald and our amazing team.  From event managing the Medway Business Awards and Kent Charity Awards, arranging corporate days for clients, to getting involved in nationwide events as part of our role as the PR machine behind National Fish and Chip Day, there’s always something to think about – venues, table decorations, the perfect walk-up music for award winners (see some of our favourites here), menus, all those little extras that guests at our events always notice and praise us for.  Now, of course, we have to think virtually too.

There’s something about starting with a completely blank canvas and bringing an event to life that gives a great deal of satisfaction.  I was talking to Colette recently about one of the best events we put on for Hovis – it was just before the launch of a new product in their Farmhouse range and, as often happened, we were brought in to put on large scale internal communications/team building  event. This was so  the marketing team could sell in a new product or concept to the sales team – often there was a level of disbelief from the sales department…’you really want us to sell a square roll?!’  Actually, I thought the Hovis Cobble, a square roll perfect for lunchboxes was a stroke of genius…but I only had to PR it – send a tasty lunch of filled Cobble rolls in a Hovis branded lunchbox to key journalists with a press release and other goodies – not actually sell it!

The event I was talking to Colette about was early in 1996 – I know this because I was only just pregnant with my first child, a now 24 year old Lieutenant in the Royal Navy, and I remember this so clearly because part of the event involved me flying from High Wycombe to Coventry… in a 3 seater plane…flown by the senior member of the marketing team – the one responsible for this particularly launch.  Being about 8 weeks pregnant, I was terrified!  We squeezed into the little plane and I was in the back surrounded by boxes of branded merchandise ready for the event.  This turned out to be a blessing because it wasn’t the smoothest of flights and poor Jo, the young marketing exec who was travelling with us, suffered rather badly and we had to deploy a Farmhouse t-shirt for damage limitation purposes! All I kept thinking was the first rule of a successful client/agency relationship ‘Don’t vomit on the client!’ After Jo succumbed, we had to make an emergency landing near Oxford and Andrew, the pilot, had to fly back to High Wycombe and collect his red, sporty little car and come and collect us and drive us the rest of the way to Coventry. 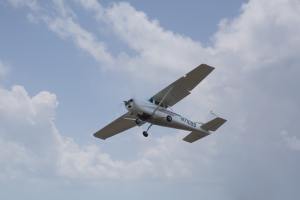 There was a reason for the plane, the client didn’t just randomly fly to events or meetings (or maybe he did?!). No, we were going to be filming the whole Farmhouse Day the next day and editing it into a film to be shown in the evening – my dear friend Clare Hollister, an award-winning advertising producer was working with us on it, as was the talented Barry Wrightson from the advertising agency Wrightson Dale who had created a new Nimble advert for British Bakeries.  Barry was our Director and Rod Snowdon was our cameraman and editor with his assistant Dave – all under the watchful eye of Clare.  The film was to begin with Andrew coming in to land and stepping out of his plane, James Bond style in full black tie, and walking towards the camera – the film would then cut to footage of him, still in his tux, arriving at the hotel where the evening entertainment would be happening – he would walk up a red carpet with the paparazzi snapping away at him.  I was roped in as Pap #1 and asked him a question about the Awards ceremony – he answered and stalked off up the carpet, I turned to the camera and went off-script and said ‘Dickhead’!  Clare nearly choked laughing, but she and Barry decided it was brilliant and if Andrew was happy, we’d keep it in.  Thankfully, Andrew was a very good sport about it and agreed and the reaction during the showing of the film from the audience was pure gold!  Now, with a lack of plane, we had to change our plans and we had Andrew arriving in his sporty little red car! It worked brilliantly. 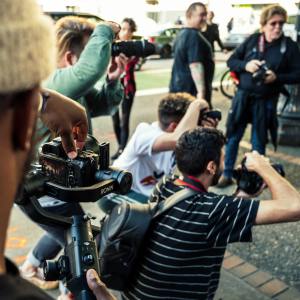 This was all unfolding before the advent of mobile phones, so Clare had to deal with a grumpy Barry and Rod who were still waiting at the airport for us to land, unaware of our plight!  Clare had to stop them breaking into the air traffic control tower to find out if we’d crashed and had to take them to a local plane museum to cheer them up!

So, back to the actual event – a Farmhouse product needed a farm.  We found a working farm, close to our hotel, that was willing to allow us to put on various farm-related, team-building activities during the day – we had wellie throwing, quad biking, an assault course with hay bales, sheep herding with actual sheep and dogs, clay pigeon shooting all sorts!  The attendees were put into teams and worked their way round the different activities, earning points and all the while being filmed. As the activities finished, the footage was rushed off to the make-shift editing suite at the hotel, ready to be turned into an Oscar-style ceremony as part of the evening entertainment.  We had footage of people working together, being extremely competitive or just absolutely ballsing things up!  A perfect combination for a great bit of film.  We had devised several Award categories before the event, had an outline script and had Hovis branded Oscar trophies and themed prizes – Dogs Bollocks Beer for the winners of the sheep dog trial sticks in my mind!  We had some spares up our sleeve for any gems we managed to catch on film during the day too. 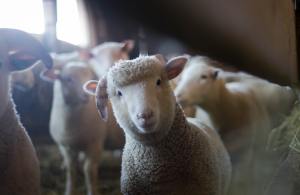 The editing team worked flat out to get the film ready for the dinner; they had just a matter of hours after the fun on the farm finished to pull it all together.  Much like our events now, we had some carefully selected walk up music ready for each category – Fleetwood Mac’s The Chain (the Top Gear theme tune) for the Quad Biking Award was a favourite – for comedy value the Award actually went to the person who drove so slowly that the instructor could walk alongside! 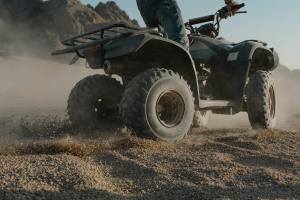 As the attendees had a chance to relax and get ready for the black tie evening event, we raced to finish the film.  As they gathered for pre-dinner drinks, and then sat down for dinner, the film piece was completed and the script – which had to be updated with winners’ names and to include the additional spontaneous awards – was finalised and ready for a quick run through with Andrew who was presenting.

After dinner, the awards began and I can honestly say, I’ve never seen a reaction like it!  People LOVE seeing themselves on camera – we started with ‘highlights of the day’ and had made a point of making sure everyone was featured in it. We then moved on to the Awards section which opened with the film shot the night before of Andrew leaving his car and then looking as if he was walking into the hotel, being papped (and called a Dickhead!) and, at just the right moment, the doors to the function room opened and he walked in and up onto the stage.  Events are all about timing!  Individual trophies were presented with the film pieces running alongside – best wellie throw, best shepherd, that sort of thing.  All very light-hearted and great fun.  The finale was the overall team winner – the group who scored the most points during the day’s activities.  Champagne flowed and the casino tables that we had at the back of the room opened to end the evening in a very glitzy way. 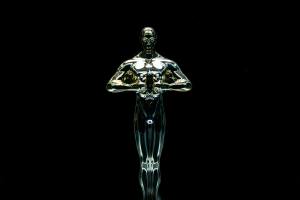 Months of planning, finding venues and hotels, script writing, getting a first class team behind you and lots of hard work on the day always pays off, and this was definitely no exception!  One event I’ll never forget – let’s hope we can back to making events as good today as they’ve always been very soon.

Sorry, no Tweets were found.